To view my teaching video of this piece, please visit my YouTube Channel.

One can perform the Offertoire, Op. 12 by Johannes Donjon for a church offertory as its title suggests or a solo festival. The accompaniment is originally for harmonium, a small organ, but is usually played on piano. Rated Level G by the National Flute Association and available in Robert Cavally’s 24 Short Concert Pieces (Southern), it is more advanced than the same composer’s Pastorale No. 1: Pan!, especially in its demands for a full singing tone in the flute’s low register and for breath control in long phrases.

Johannes Donjon (1839-1912), whose name means the keep or tower of a castle in French, was principal flutist of the Paris Opera Orchestra and a student of Jean-Louis Tulou (1786-1865), a long-time professor at the Paris Conservatory in the days before the modern Boehm flute was adopted. Along with the popular Offertoire and Pan! Donjon wrote eight Études de salon and many other flute works that are hardly known today.

The following table summarizes the form of the work:

Throughout this piece, Donjon uses a figure that is standard in classical music from the baroque to the present, the appoggiatura. This is a dissonant note (one not in the accompanying harmony) that resolves stepwise to a chord tone. There is a sense of tension/release or a sigh, and one must always use more vibrato and play louder on the appoggiatura and then diminuendo to the next note. Practice this in meas. 4, 8, 10, 12, 14, 15, 16, etc. Avoid going flat in the taper by raising your head.

Meas. 1-8: The metronome indication of quarter=72 is too fast for a contemplative solo; I prefer quarter=50. Thinking ahead to the last section of the piece, play enough to project over an accompaniment, but not too loud (this theme returns at a forte level later). Make a little crescendo through the pickups into the downbeat. Keep spinning your tone forward into meas. 2. Careful not to go flat on the low C at the end of this phrase; keep the angle and the speed of the air up. To prepare for the fingering of low C, play the previous note (F) without the pinky. Use the same technique in meas. 3 (no pinky on the B-flat before the low C-sharp).

Starting with the pickup to meas. 3, the second phrase has heightened expression; play freely to show the chromatic inflections. Take a big breath in meas. 4 after the E, as you must go into the downbeat of meas. 7 before breathing again. Do not breathe after the low C in meas. 6, as there is a slur here, and the phrase continues; in fact, crescendo through the C and C-sharp. Again, play freely in meas. 7, lengthening the C on beat 3. Trill only once on the low E, and carry the D-sharp through into beat 4.

Meas. 9-16: An appropriate tempo here is quarter=66. Many flutists go horrendously sharp in meas. 9 and 13, so practice with a tuner, play the high E’s without the right-hand pinky, keep the lips relaxed, and be careful not to overblow. Although the line descends in meas. 9, 11, and 13, all of these bars crescendo into the appoggiatura in the following bar. In meas. 14-15, play the turns as 32nd notes on the “and” of the beat; the lower note of the turn in meas. 15 is a D-natural:

Meas. 17-24: These bars comprise a return of the main theme, with one difference, meas. 23. It is neither necessary nor desirable to play the second beat of this measure in time; the accompanist can wait for you to arrive on beat 3. This flourish is basically a G minor chord and is easily fingered using thumb B-flat. Organize the fifteen notes into groups of five, four, and six, stretching the turn around B-flat at the top. In beat 3, play the turn on the “and” and play D-sharp (carried through from the previous beat).

Meas. 24-39: An effective tempo for the Agitato section is quarter=84. Use a faster vibrato to reflect the change of mood. Sustain through the descending lines and open the tone for the low register. Follow the dramatic dynamics as indicated. Carefully practice the large slurred intervals, coordinating embouchure with finger changes. Plan breaths so they do not stop the momentum; I take breaths only after the B-flat in meas. 25, at end of meas. 27, between the A’s in meas. 30, and after the low D in meas. 31.

It is not clear whether the marking dolce più lento (sweetly, slower) in meas. 31 applies only to this measure or to the following section. Take time in meas. 31. The B-flat major section is less agitated then the previous part but needs more motion than the main tempo, so quarter=76 is appropriate here. In meas. 34, the F-sharp needs a bright sound, while the G-flat needs a more covered color. There is always a reason for a composer to write the same enharmonic note in differing ways, so an interpretation must reflect this difference. Stretch the ends of meas. 35 and 39.

Meas. 40-48: The final return of the main theme, unlike its prior appearances, begins forte, so really sing! In meas. 46, play the turn as a triplet with a D-sharp lower neighbor: 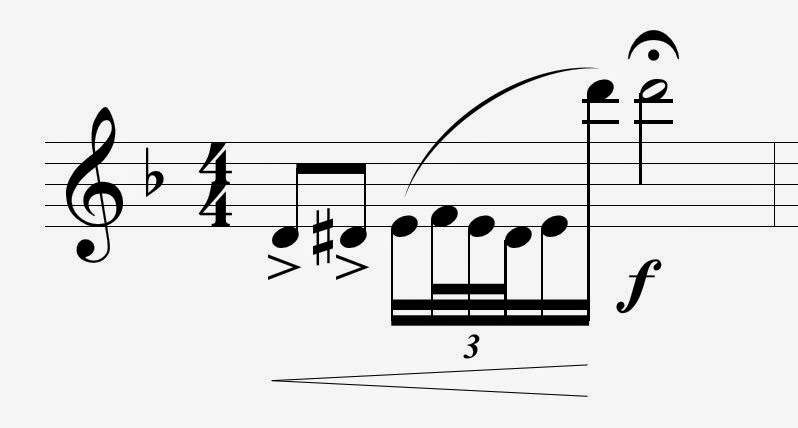 The piece ends with a cadenza, so vary the pacing. Organize the runs in small groupings of threes, fours, and fives. At first, practice one group at a time, going into the first note of the next group (for example, play C-B-flat-A-G, then G-F-E-D, etc.); then put the groups together.

In the last line, breathe after the fermata A, not before it (even though one needs to break a slur). There is a colorful chord in the middle of the trill, so crescendo to the third beat of that bar before making a gorgeous diminuendo to the high F.