Armand Bournonville’s Danse pour Katia, or “Dance for Katia,” is a popular selection for flute and piano. Rated Level F by the National Flute Association, it is appropriate for intermediate flutists in their second or third year of study. For a video performance guide to this work, please visit https://www.youtube.com/watch?v=aGDk830HZZE.

This little-known composer lived from 1890 to 1957 and also wrote a Nocturne for flute or violin and piano, a Fantasie-Impromptu for clarinet and piano, and a book of sight-singing exercises. He composed Danse pour Katia in 1929 and dedicated it to Marcel Moyse, an important French flutist and recording artist. During the 1930s, Moyse was the flute professor at the Paris Conservatory and after World War II moved to the United States, where he influenced an entire generation of flutists through his classes in Vermont.

There are two quite different editions of this work, one edited by Robert Cavally and published by Southern Music Company, and the other published by the French company Billaudot and adhering to Bournonville’s original markings. 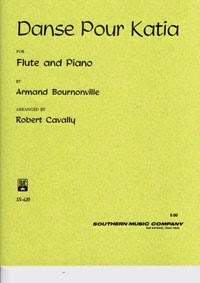 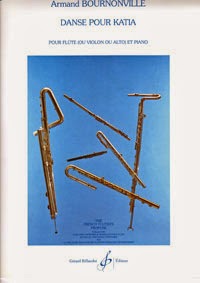 While some of Cavally’s ideas are good interpretive suggestions, it is always important to know a composer’s original intensions. I prefer an “Urtext” edition, or one reflecting original notation, to one marked up by an editor. There are also numerous wrong notes in the flute line of the piano score in the Cavally edition. Thus, the slightly higher cost of the Billaudot edition is worth the investment.

This piece is a waltz, which determines the style of performance. The tempo is Allegretto giocoso, not quite as fast as Allegro and in a light, playful or joking manner (by the way, Cavally changed this to Allegro giocoso). Bournonville provides the metronome marking of 66 to the measure. One can perform a little slower to accommodate technical challenges, but still with a feeling of one beat to the measure, an important characteristic of waltzes.

Another aspect of the waltz is staccato. The first theme is originally marked staccato, piano, and leggiero, or light. Cavally changes this to staccato dots plus tenuto marks, mezzoforte, and leggiero. I prefer the staccato but share Cavally’s concern that some flutists may perform too dryly. One should always create the staccato mainly with the air instead of with a hard tongue, and a great exercise is to practice with no tongue at all, which forces one to organize the air into tight little packages. When adding the tongue back in, make sure to use a light syllable (D not T) and keep the end of each note open and resonant. In other words, each note should end with a vowel (Doo) rather than a consonant (what I call King Tut).

Play this first theme strongly enough to project over the piano accompaniment, but not really mezzoforte, as one has to leave room for the sound to develop during the course of the piece. Change color when different chromatic inflections of the same note occur. Meas. 4 features F-sharp and E, straightforward notes. Darken your sound for the F-natural and E-flat in meas. 6, as these notes are not in the key and therefore more expressive. Raise the dynamic level in meas. 11 and then really go for the crescendo in meas. 15-18. The composer writes a dramatic subito piano in meas. 19 (this is missing from the Cavally edition).

There are many little ritardandi and caesure (or “railroad tracks”) in this music. Do not overdramatize these or come to a complete stop, or else the momentum never gets going. Just take a little time to breathe.

In meas. 43-55, follow the dynamics. At the flute entrance, Cavally changes the original mezzoforte into a forte, which is OK, but he omits the piano at meas. 47, which is essential. Another color change is the C-sharp in meas. 45 followed by the C-natural in meas. 49, which requires a varied inflection. In the crescendo in meas. 52-55, avoid going sharp by blowing steeply down, keeping the embouchure open and relaxed, and adding the right-hand ring finger to the final high F. Practice this passage slowly with a tuner.

Meas. 77-78 is an element that French composers favor, the whole-tone scale. Practice this by memory so the notation does not throw you off.

The last two lines are a coda. Più vivo means more lively or faster. If the tempo before was 66 to the measure, now one must play at least 72 to the measure. Double tonguing is extremely useful here. If you have not tried this technique, now is the time! The syllables are Doo-Goo. Learn double tonguing by improvising various rhythms on scales, like eighth and two sixteenths (Doo, doo-goo) or two sixteenths and an eighth (Doo-goo-doo). When you start after a rest as in meas. 103, start on the Goo, as then you will say Doo on the beat. Note that the last three bars are a chromatic scale. Any fast passage that is written tongued should first be practiced slurred so one can even out the fingers; the tongue can be added once the fingers are smooth.